Ken Ross returned recently from Italy excited about their co-operatives. The Emilia Romagna region is one of the most prosperous in Europe and the home of luxury car manufacturers, Ferrari, Lamborghini, Maserati and Ducati. It has a population of 4.5 million with two out of every three citizens in co-operatives. This Prezi has more background. 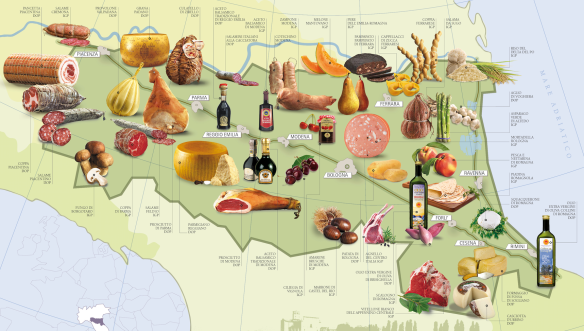 This map of Emilia Romagna shows the range of produce common in the region. Click here for a larger image.

The roots of the co-operative movement in Italy were in the nineteenth century. Visionaries promoted collective economic enterprises, not based on individualism and self-interest. In this interview, Italian academic Vera Zamagni also identifies socialist and Catholic foundations for the movement. More recently, Article 45 of the Italian Constitution, lays a solid policy foundation for co-operatives, for example, one person, one vote.

New Zealand agriculture has a strong co-operative tradition, but without the constitutional protection of “one person, one vote” these typically evolve to control by a managerialism with a consequent alienation of members. Faggiola is one example of co-operative food production in Northern Italy.

“…cooperatives tend to humanize the market because of their rules of functioning: the person – the member – is at the centre, not capital”. (Vera Zamagni)