In How Change Happens, Duncan Green uses the domains of change model. We can understand change processes by noticing how these four domains each influence change. It also reinforces that each of the four domains are important and we are more likely to achieve significant change if we can leverage all four. 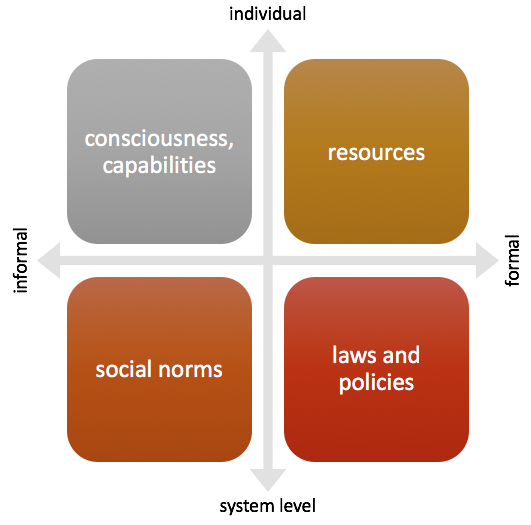 Here are three brief case studies to illustrate how change happens. They aren’t necessarily about the food system, but there are links. They illustrate the complexity of change dynamics.

Here is an example of change where international policy worked relatively quickly. In the 1970s we recognised the danger of ozone “holes” over the polar regions and identified ozone depleting substances (such as hydrofluorocarbons) as the cause. In 1987 The Montreal Protocol set up a timetable to phase out ozone depleting substances.
This initiative has been a great success and a beacon of hope for other collective international action. In this case, policy was the main tool – if we had to rely on changes to social norms or individual consciousness the rate of change would have been much slower.

Is there any large community on earth that hasn’t relied on slaves to get work done at some point in their history? For millennia up until the industrial revolution provided the means to make work easier, people have kept slaves.

Adam Hochschild’s Bury the Chains is a brilliant case study of the abolition of slavery. In the late 18th century, individuals such as Thomas Clarkson, experienced a shift in consciousness that opened their eyes to the injustices of the slave trade. Britain was sourcing slaves from Africa and shipping them to the Caribbean and Americas to power the production of crops such as sugar and cotton.

They accessed resources, such as printing presses and took full advantage of the rise of the newspaper. By raising awareness the early abolitionist prompted the world’s first consumer boycott – when people refused to buy sugar. In a move reminiscent of the Fair Trade movement, those who could afford it could buy sugar not produced by slave labour – thus social norms changed.

After sustained activism, policy change saw the English withdraw from the slave trade, when parliament first passed the Slave Trade Act in 1807 and later the Slavery Abolition Act in 1833.

Mitigating climate change requires action across a broad front – the focus here is on weaning ourselves off oil. In less than a century humanity has become so dependent on oil that it is hard for many to see an alternative. As with the previous case, change in individual consciousness is the bedrock for change. Visionaries, such as Elon Musk, challenge norms and create an alternate future. As more people get the vision, it comes closer to challenging social norms, but we are not there yet.

This vision is reflected in Northland in people like Joe Camuso. They build their personal capabilities, especially through growing their knowledge and networks and walking the talk.

In some countries, subsidies for electric vehicles provide a resource to incentivise change. In Northland, Northpower’s work in rolling out charging stations creates the technology and infrastructure to support a shift in social norms.

Market dynamics will complete the switch to electric vehicles. They will reach a tipping point when they are cheaper than conventional cars. But for this to happen demand for the vehicles can be supported by policy at all levels – international down to family and individuals. As an example, recently Whangarei District passed a remit to purchase electric vehicles for its fleet. This change is becoming inevitable.